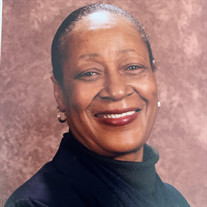 On June 26, 2021 our lives were forever changed when our devoted mother, proud grandmother and great grandmother, older sister, wise aunt, cherished cousin, spiritual mother, loyal friend and "Gigi" went to sleep in death. She was 80 years young. Born February 18, 1941 to Henry Troy Williams and Ernestine Sweet Williams Coleman in Lawrenceville, Virginia. She was the eldest daughter of 9 children. Her close and strong sibling ties were the foundation for her love of family. A 1958 graduate and Salutatorian of Rosenwald High School and a 1996 graduate of Gulf Coast Community College, both in Panama City, Florida. She loved and studied Interior Decorating and Business, and earned her Associate in Science in Human Services at the age of 55. After working in varied and diverse roles at the US Federal Reserve, Salomon Brothers brokerage firm and Donaldson, Lufkin & Jenrette investment bank in New York City, she returned to Panama City and led the office management team for several medical practices (including her brother, Freddie's). Teaching and imparting her wisdom to the young minds at Oakland Terrace Elementary is the role that fulfilled her the most. She even got to show some Aunt Laverne Love and Discipline to some of her nieces and nephews while there. After retiring from her professional career, Laverne relocated to Atlanta, Georgia. But she didn't slow down. Her creative and entrepreneurial spirit moved her to build and manage her own online store, selling high-end designer clothes and sports paraphernalia. Among her great loves were teaching, thrift store shopping, sports (an avid Atlanta Falcons and Braves fan), watching old westerns and competitions on television, road trip adventures with siblings, sisters-in-law, nieces and nephews and planning the family reunions. Laverne took the lead in planning the first Williams "Bebe's Kids" Family Reunion in 1993. And she set the standard with her special twists, including the "No Talent, Talent Show", Ancestral Research dating back to the late 1700s, and a lively family auction to raise funds for the unprecedented Cusseaux Eleam Family Scholarship Fund. Her final residence was in Clovis, New Mexico where she was lovingly cared for by her sister Camilla, embraced daughter Tasha, and daughter Monique. She leaves to cherish her memory her son Gregory Knight (Antionette) of Ashburn, Virginia; daughter Monique Messer-Baldwin (Mitchel) of Clovis, New Mexico; two grandchildren Lauren and Alicia Knight of Union, New Jersey; great grandson Owen Gregory Knight of Union, New Jersey; sister Camilla DeRamus (Joseph) of Clovis, New Mexico; brother Anthony Williams of Atlanta, Georgia; brother Devonde Mosley (Donna Kay) of Chipley, Florida; and a host of many loved ones across the globe. ***IN LIEU OF FLOWERS, THE FAMILY RESPECTFULLY REQUESTS ALL DONATIONS BE MADE IN MEMORY OF LAVERNE WILLIAMS BALDWIN TO GREAT ASPIRATIONS SCHOLARSHIP PROGRAM, INC., AT GRASP4VA.ORG

The family of Laverne Williams Baldwin created this Life Tributes page to make it easy to share your memories.