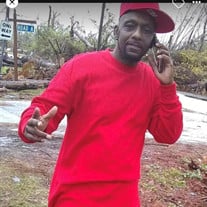 James DeVon Eady Jones was born to Emma Brinson and James Jones on January 21, 1961, in Panama City, Florida. He gained his wings on December 21, 2021. James accepted Christ at a very young age. James attended public Schools in both New York City and Panama City, Florida. He graduated from Bay District School System. James was known for his unique raspy voice and his captivating smile. James was also a very sporty fellow who loved to dress and who loved to spend time with his special friends. James was always the life of the party and the one that everyone enjoyed hanging out with. He had the ability to make everyone laugh and feel loved and invited. James loved his family. He had a greater love for his grandchildren who he vowed to give them anything that they wanted. He was preceded in death by his father, James Jones, his stepfather Earnest Brinson, his sister, Linda Mae Rogers, and his brother-law Carlton Robinson. James leaves to cherish his memories his devoted mother Emma Brinson; one son, Yasin Galbreith of Panama City, Fl,; two brothers: Derrick Eady-Jones and Kenneth (Cysrilla) Eady-Jones both of Panama City, FL and one sister: Carolyn Jones-Robinson ; four brothers in love Eldric, Cedric, Delanjun, and Zedric; three grandchildren; Elijah, Valencia, and Akira, seven nieces Star, TyJhanae, Jadiyah, Rinique, Falynn ,LaToya, and Alicia; three nephews, Derrick, Princeton, Darius ; and a special aunt, Ada Mae Smiley of Panama City, FL; five Uncles, Joseph Williams of Panama City, Rev. Robert Jones of Dothan Alabama, William Jones and David Jones both of Panama City and Larry Jones of North Carolina; two aunts, Dorothy Jones of New York City, and Piquetta Jones of Panama City, Fl and a host of cousins, relatives and friends.

The family of James DuVone Eady created this Life Tributes page to make it easy to share your memories.

Send flowers to the Eady family.