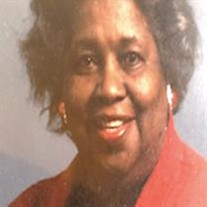 Annie Lou Griffin Baldwin was born in Lynn Haven, Florida on February 28, 1930 to the late Charlie and Nettie (Wilson) Griffin. She departed this life on Thursday, June 7, 2018. Annie attended Lynn Haven Grammar School where she was taught by Professor A.D. Harris and Mrs. Harris. This helped shape her love for education. She attended Rosenwald High School. She continued her education at Edward Waters College in Jacksonville. At Edward Waters College she studied education and in her sophomore year she was crowned Miss Sophomore. She continued her studies at FAMU where she completed her studies in education. Later she went to University of West Florida to get her certification in early childhood education. She was introduced to her future husband by Nathaniel Horne in 1957. She married Mr. Chancy Baldwin on August 16, 1959 at Tyndall Air Force Base. Later they would add to their family two daughters, Valette Baldwin and Yvette Baldwin. Over the years, she participated in many social and civic clubs. Annie was a member of the Egellocs, The Ebonaires, the Eastern Stars, and the Lynn Haven Community Bible Club. Annie was an active member of Allen Chapel A.M.E. Church since she was a child. She was a member of the Stewardess Board, the President of the Women’s Missionary Society, the Youth Department and a Sunday School teacher. Her Christian philosophy in life was “Do unto others as you would have them do unto you.” She was a true friend, an outstanding mother, and a Christian woman. She always strived for the best and treated people with dignity and respect. Annie always remembered her loved ones and friends who helped and encouraged her throughout her life. She is survived by her two daughters: Valette (Fitz) King of Orlando, Florida and Yvette (Ross III) Thompson of Miami, Florida and one brother: James (Deloris) Griffin of Ocala; seven sisters-in-law: Helen Griffin, Laura Griffin, Shirley Griffin, Willie Mae Stanley of Lynn Haven, Florida, Ann Griffin of Chicago Illinois, Merriam Griffin of St. Petersburg, Florida, and Clatie Baldwin of DeFuniak Springs, Florida; four grandchildren: Alicia, Frederica, Tamar, and Kendra; four great-grandchildren: Kymora, Chloe, Allison, and Carlton Jr;. four godchildren: Terelyn Clark, Charlotte Marshall, Ricky Scott Jr. and Gay Speights. She also leaves to mourn a host of nieces, nephews, cousins, and friends. The family wishes to acknowledge special caregivers: Ms. Mary Mack, Ms. Mary Nell Brown, and Mrs. Rosemary Wade. Thanks to her special prayer partner, Mrs. Betty Rouse and her devoted friend Mrs. Carrie Peterson. The family would also like to thank the staff of Community Health and Rehabilitation Center for their care and compassion for our mother.

The family of Annie Lou Griffin Baldwin created this Life Tributes page to make it easy to share your memories.